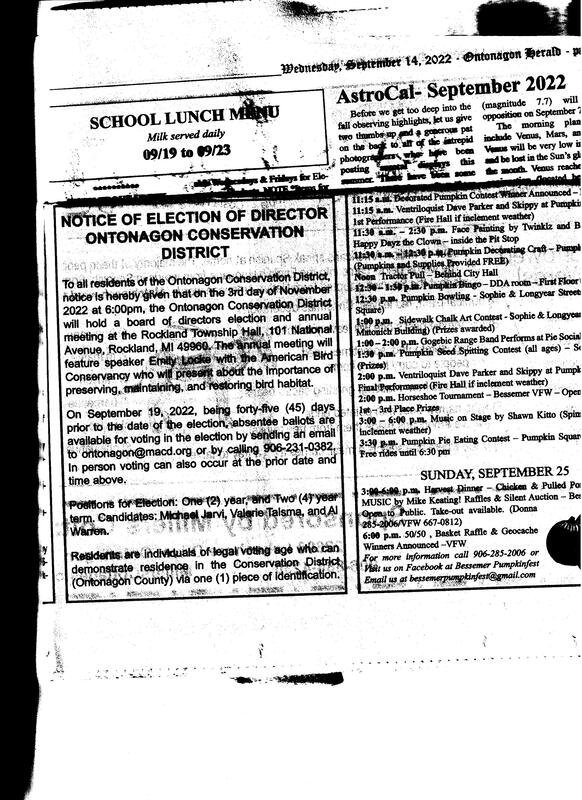 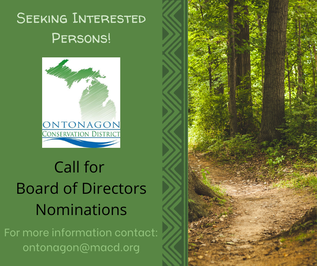 Candidates have until September 2nd, 2022 (no later than close of business at 4:00pm) to file a nominating petition for the election that will take place at the Annual Meeting in the fall of 2022. A candidate must be a resident of Ontonagon County. A resident is defined as an individual of legal age who lives within the district (county) and can verify this by one piece of identification. The petition needs to be signed by at least five (5) district residents. If you have additional questions or are interested, please contact ontonagon@macd.org. 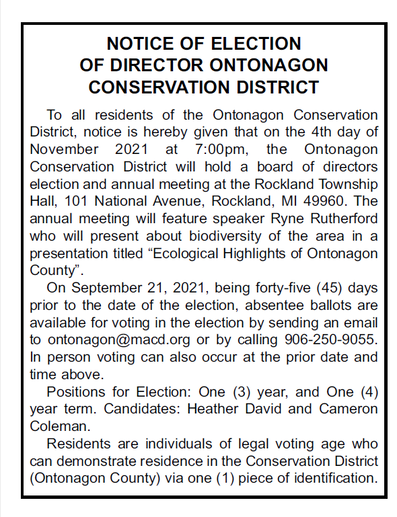 Ironwood Daily Globe. December 2, 2020
Ottawa Forest receives grant for tree planting
IRONWOOD — The Ottawa National Forest is receiving funding to continue a tree-planting effort designed to mitigate the damage emerald ash borers could cause in areas of the forest as part of a round of recently announced U.S. Forest Service grants. The Ottawa National Forest, in partnership with the Ontonagon Conservation District, will use the $10,000 grant to plant trees in some of the forest’s black ash wetlands in southern Ontonagon County. The goal of the project is to continue diversifying the types of trees growing in the wetlands as a safeguard for when the emerald ash borer arrives in the forest, according to those involved in the project. “We have white ash and black ash trees scattered throughout the Ottawa National Forest, and most of them will likely die in the coming decades from emerald ash borer,” said Ian Shackleford, the botanist coordinating the effort. “In most areas, other native trees will keep the land forested, but we are worried in particular about our black ash wetlands. Black ash can make up 90% or more of the tree canopy, so if those trees die the site could change from a forested wetland to a shrub swamp or wetland meadow.” The ash borer is an invasive beetle that feeds on the inner bark of ash trees, which then die when they can’t transport water and nutrients, according to the Associated Press. The beetle was first discovered in Michigan in 2002 and has since spread to other states across the country. The ash borer has yet to be found in the Western Upper Peninsula, although those involved in the tree planting say it will be in the region at some point. “It’s inevitable it is going to be here, it’s just a matter of time,” said Al Warren, one of the directors of the Ontonagon Conservation District. Warren said the ash borer totally eliminated all the white ash around his native Alpena over the last decade or so. “Now it’s in the eastern U.P. and it’s working its way this way,” Warren said. “It’s going to be here. All our ash trees are going to die, we know that; and (the question is) what do we do to replace them?” White oak, white pine, balsam poplar, silver and red maples are among the types of trees being planted as part of the grant project, according to Warren. The work continues efforts the Ottawa Forest has been making since 2019, according to Shackleford, in anticipation of the ash borer’s arrival. “Hopefully, when emerald ash borer arrives and begins killing our ash trees, these new species can keep the wetland forested,” he said. Shackleford said the work is based on research from the Forest Service Northern Research Station, Michigan Technological University and other scientists. Much of the actual tree planting is expected to begin in 2021 in wetlands located south of Ewen, according to those involved in the project, near Sleepy Hollow Road. The $10,000 grant comes as part of the nearly $4.5 million the Forest Service awarded in November to 27 projects in Michigan, Wisconsin, Illinois, Minnesota, Ohio and New York as part of a collaborative Great Lakes Restoration Initiative with the Environmental Protection Agency. The initiative targets some of the biggest threats to the Great Lakes ecosystem, according to the funding announcement, and has resulted in over 540,000 trees being planted on nonfederal lands since 2010 along with preventing over 31 million gallons of stormwater runoff per year. Among the other projects being funded this year were: the city of Marquette and the Superior Watershed Partnership are receiving $116,268 to plant over 1,800 native trees and shrubs along 4,200 feet of Lake Superior shoreline to restore coastal habitats; and Lake Superior State University is receiving $250,000 to create the first green stormwater demonstration project along the St. Marys River. Editor’s Note: The Associated Press contributed to this story. 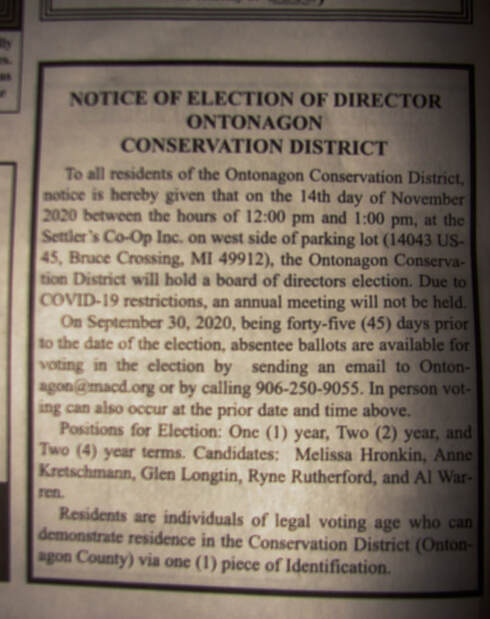